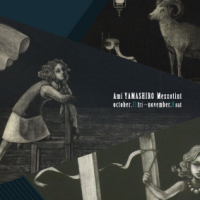 Mezzotint, La manière noire, copperplate intaglio. Inspired by the distinctive rich velvety black that is produced by mezzotint, artist Ami Yamashiro creates a world of nostalgic visions, a sense of mystery and a feeling that one is suspended in the midst of something extraordinary. Her concept, “an untruth that cannot be said to be untrue” causes us to question that which we are viewing. Although to the casual observer the prints appear to be complete, they are not. Yamashiro says, “I want to leave it unfinished to allow the viewer to converse with the subject and complete the work, filtering it through their own experiences and ideas bringing their own thoughts into the process.