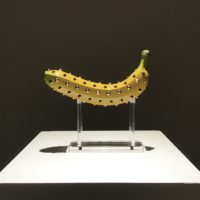 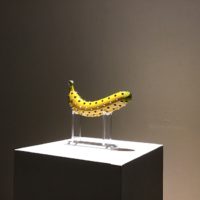 Born in 1995, Ryoma Noda recently received a Master’s degree from Tokyo University of the Arts, after majoring in lacquer ware. This exhibition, his first at SEIZAN GALLERY TOKYO 凸, will showcase the artist’s ability to apply traditional techniques in the service of a highly original artistic style, resulting in artworks that have their own one-of-a-kind presence.

The work on display in this exhibition utilizes the motifs of Southeast Asian mythology to ask fundamental questions about the true nature of humankind.

As a university student, I studied abroad briefly in Southeast Asia, where I saw firsthand the vast disparity in wealth that exists but was also moved and astonished by the gorgeous temples and tangible spirituality of the region. Though the people lacked what we would consider material comforts, it felt as if they were using the act of prayer to maintain a positive mindset and it occurred to me that temples and Buddhist statues, through their ability to indirectly contribute to a rich inner life, are not unlike art. I also began to think that I would like my own artworks to exist in a similar way.

It was from that moment that I became interested in the mythology of Southeast Asian peoples, and especially focused on the “banana myths” that are often associated with the genesis of life and death.

―
“A typical banana type myth is as follows:

God presented a stone and a banana to people and ordered them to choose either of them. People chose a banana because they could eat it rather than a stone that couldn’t be eaten. A changeless stone is a symbol of immortality, so if people chose a stone, they would be immortal (or live long); but they chose a banana and people are destined to die (or have a short life).” – Wikipedia
―

While humans chose the banana for its material benefits, the advent of death as an ending point in the human life span taught us to value the limited time we have, and I believe it is that process which enables us to seek happiness and give praise while we are alive.
In addition, upon continuing my research after returning to Japan, I visited a banana farm and was struck with awe at the sight of 2-300 bananas sprouting from the thigh-length trunk of a banana tree and being pulled upside down by the forces of gravity, as if the tree bore several overlapping crowns. The image enabled me to feel the raw power of life wielded by nature and I came away wanting to express that energy by creating idols symbolic of “ascent” and “growth” in my own work.
The rivets that decorate this piece are my own attempt to capture the invisible energy of bananas in concrete form.