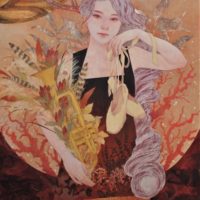 The artworks of Sanami Shimada use figurative images of women to express a diversity of emotions and ways of being for natural lifeforms.

The large canvas created for this exhibition is based on the concept of “dancing alone to music that you perform”. That spirit is directly conveyed by the image of a woman holding a trumpet and ballet shoes.

Musical performance and dance are, by their nature, oriented toward the future. One could say that their essence is the continuation of individual moments that never pause in one place, each being spent for the sake of the next. In form, as well, they are constantly guided toward what comes ahead. Musical performance is led by sheet music or other performers. Dance is led by music and space.

When we consider the aforementioned concept with these things in mind, the creator’s powerful desire for self-determination becomes clear. “Dancing alone to music that you perform” — in other words, every person must be guided by their own self.

Of course, doing both things at once, on your own, is not an easy task. If it can be accomplished, however, would that not be the true meaning of controlling one’s own future?

When we speak of forging our own path to tomorrow, one might imagine acting in a bold, stately manner, but even that behavior may begin from awkward, comical first steps, accompanied by a distorted melody.

It is that diligent effort which unlocks limitless emotional impact and captures the hearts of viewers.

In my work, I have long explored ways of being, as well as the environments and emotions that influence them.
For me, to paint images of a variety of living beings is to commit to memory a record of my own life. That is the meaning behind my practice.
The theme of the work on exhibit is “dancing alone to music that you perform.”

When we observe seemingly foolhardy behavior, whether we see those acts as pathetic or bold will change depending on our own present circumstances, as well as the times and environment in which we live. However, in the course of our daily lives, everyone could potentially be confronted by that same question.

Were we to seek happiness in our reality and dance toward that future, how would we appear to ourselves and to others?

As they confront this single piece within the environment of the exhibition, I hope that viewers will imagine the future that lies beyond the focused gaze of the girl in the painting, converse, and discover their own answers.